One year ago today, Travis James made a suicide attempt due to overwhelming stresses, but thankfully survived. In the past year, he has been involved with Thumbs Up Foundation and become a strong advocate for mental health and addressing the stigma that surrounds it.

In August 2020, he began as a Harmonized Health Client. He continues to work with Thumbs Up through his #StacheTheStigma fundraiser that he initiated in support of Thumbs Up and to help raise awareness for mental health and addiction. He will be growing out his moustache and selling #StacheTheStigma T-shirts until May 24.

Travis shares that a big part of his recovery process is sharing his story to raise awareness and hopefully inspire people to take their mental health seriously. When we asked Travis if he might be interested in participating in a video interview, he was courageous and gracious enough to agree. His story has also been shared by Airdrie Today.

If you would like to make a donation in honour of Travis’ 1-year anniversary since his suicide attempt, please click the button below.

A big thank you to Stephen & Izzy for creating the video, as well as Airdrie Today for sharing this story.

Yesterday, Airdrie Today released a story about Travis James who has been working with Thumbs Up Foundation as both a Harmonized Health Client and a mental health advocate. He began his #StacheTheStigma fundraising campaign to raise funds for Thumbs Up and to encourage conversation around mental health. Thank you to Airdrie Today for sharing this important story, which is posted below. If you would like to learn more about Travis’ journey, watch his interview with Kim Titus here.

April 24, 2021 will be the 1-year anniversary of Travis’ suicide attempt. Help him meet his fundraising goal by donating below!

A year after a failed suicide attempt, Edson bullfighter Travis James has found a new lease on life, with help from an Airdrie-based non-profit organization.
April 22, 2021
By: Scott Strasser 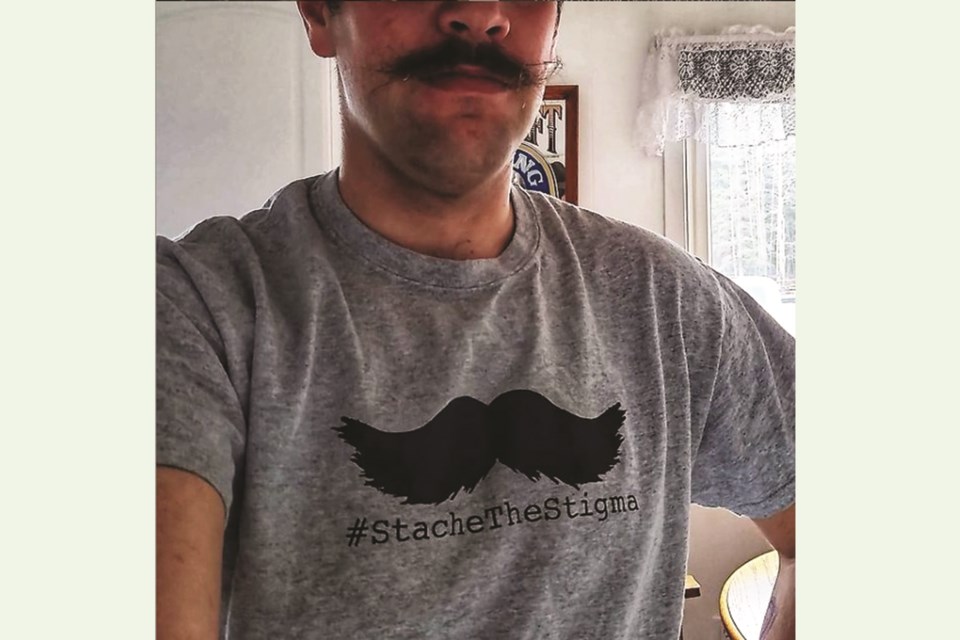 Since August 2020, Edson bullfighter Travis James has been growing out his moustache and raising funds for the Thumbs Up Foundation in Airdrie.Submitted/For Airdrie City View

A year after a failed suicide attempt, bullfighter Travis James has found a new lease on life, with help from an Airdrie-based non-profit organization.

On April 24, 2020, James attempted to take his own life. The Edson, Alta. resident said he was in a bad place mentally, at a time when the onset of public health restrictions brought on by the COVID-19 pandemic had impacted his livelihood as a bullfighter.

“There were no rodeos and that’s how I make a large portion of my income,” he said. “It got to be too much.”

Fortunately, James is still around, and since that fateful day, he’s been able to receive help from the Thumbs Up Foundation – a non-profit organization in Airdrie that aims to improve access to mental health-care and resources and raise awareness of suicide prevention.

The Thumbs Up Foundation was formed by married couple Kim and Kim Titus in 2015 after their son Braden passed away from suicide. After a family member of James told the Tituses about his struggles, the Airdrie organization got in touch with the bullfighter and set him up with their mental health resources and network.

Kim Titus, the charity’s co-chair, said she is immensely proud of how far James has come in the last year, with regard to his mental health progress.

“I can’t even express the tremendous amount of respect and regard I have for Travis,” she said. “He’s a bullfighter, for God’s sake. He lives in that world and his courage to come and talk about his experience, to face it head-on and be a spokesperson and ombudsman for the mental health movement and the message he has – I just hold him in extraordinarily high regard.”

According to James, since being connected with Thumbs Up Foundation, he has utilized their counselling services and undergone a cognitive brain analysis.

As a way of saying thank you to the charity for its support, he kicked off #StacheTheStigma last summer – a fundraising campaign that aims to raise money for the Thumbs Up Foundation and strike up a conversation about mental health. Until May 24, James said he is growing out his moustache and selling T-shirts emblazoned with #StacheTheStigma on them, with the proceeds supporting the Thumbs Up Foundation.

“I was hoping to reach $13,000 by the May long weekend but it’s hard right now to fundraise because we keep getting locked down,” he said.” It’s hard to reach out and ask people to donate when lots of people are losing their jobs, but any goal is better than nothing.”

James is encouraging people to donate to the foundation at bit.ly/2QJZgmw

Titus said initiatives and campaigns like #StacheTheStigma are what it is going to take to help end the stigma associated with mental illness. She said having someone like James, who is associated with the typically-macho world of bullfighting, be upfront about his mental health struggles is a big step forward.

“In my world, it’s first and foremost an awareness campaign,” she said.

“You never know – and he may never know – who he’s impacted, whose mind he changes and who hears his message who needs to hear his message. That’s first and foremost the biggest thing. We’re grateful for our relationship with Travis and everything he’s doing – he’s a great ambassador for mental health.”

With the finish line for #StacheTheStigma just a month away, James said he intends to continue raising funds and support for Thumbs Up Foundation, even after the May 24 deadline has passed.

As for the moustache, he added he’s taken to his new facial hair and may decide not to part with it quite yet.

“I might just shave my head instead because I’m kind of liking the moustache,” he said.

About the Author: Scott Strasser

Yesterday morning, Strike Group, TC Energy, and OTS presented Thumbs Up Foundation with a cheque from their fundraising efforts. Strike Group and OTS raised $8,100 with donations from them and through their 50/50 fundraiser. TC Energy as one of their partners matched the funds for the grand total of $16,200.

A huge thank you to Strike Group, TC, and OTS! Thumbs Up is incredibly grateful for these three groups for the support, the donations, and raising awareness.

By Thumbs Up Foundation | Uncategorized

Strike Group and their customer have teamed up to support the Thumbs Up Foundation! The crews on our Didsbury and Nordegg sites have started a combined fundraising effort to support this foundation. We are very grateful  for the support! 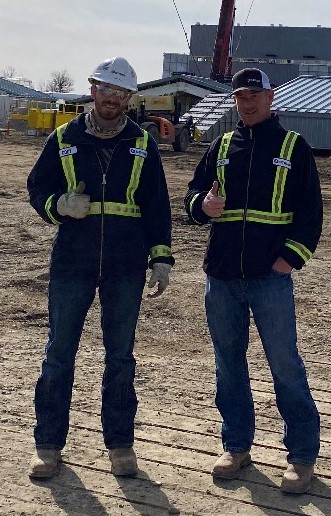 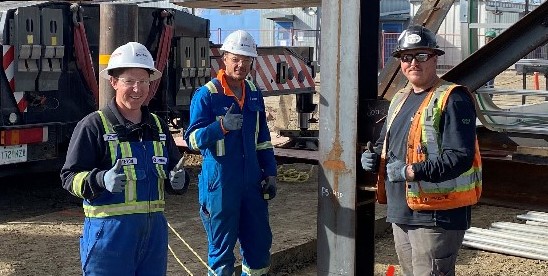 As a volunteer-run organization, TUF is not staffed to offer emergency mental health services. If you need immediate help, please consider the following resources: